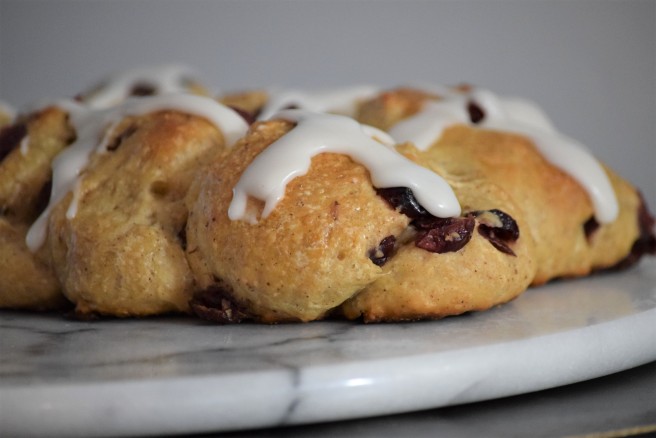 Good morning from the other side of winter storm Stella!

With upwards of a foot of snow predicted, school was cancelled before the storm even started. Snow day! A snow day sometimes feels like a gift, an unexpected (and much-needed) opportunity to slow down a bit and rest.

So I did plenty of that.

But I also puttered around the kitchen. As you’ve read before, nothing centers me quite like baking, and I’ve been looking forward to experimenting with hot cross buns for Lent. I honestly don’t much care for currents or other dried fruit typically found in these breakfast buns, so I tossed some cranberries in the dough to see how they’d turn out.

It was an adventure.

First, I almost broke our hand-held mixer. I really, truly thought I could get the dough to a semi-mixed consistency and hand mix the rest,  but it got too thick , too quickly. It was almost a disaster for that ancient mixer of ours.

Next, I think I added too many cranberries. By following the recipe, I added as many cups of dried cranberries as the recipe called for raisins and other dried fruit. Personally, I think it was a bit too much. Maybe cut the amount by a fourth.

After that, it was all Stella who stole the show because her drama-filled high winds knocked our power out just as I set the buns for their final rise.

Power resumed about two hours later, and by that time, I was ready for bed.

I did what I could to save the dough by refrigerating over night and baked this morning.

Stella’s gone now … and I think these buns are soon to follow suit.

Here’s the link to King Arthur Flour’s recipe for Easy Hot Cross Buns. Follow as is, or try the cranberries for something a little different. Enjoy for Lent … or any random Tuesday morning.

if you’re happy, and you know it